Why can’t we just use Google Translate instead?

Anyone who can speak another language or has had to translate from one language
into another will have come across the question: ‘Why can’t we just use Google
Translate instead?’ – This is a question that frustrates a lot of translators
as well as language learners. 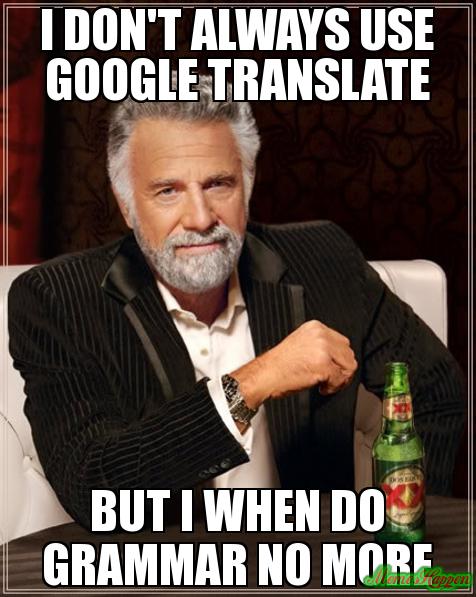 In an increasingly electronic world, it’s no wonder that technology has found
its way into the translation industry, and it has most certainly not been a
bad thing either! There are two main types of translation technology: machine
translation (MT) and computer-assisted translation (CAT). MT relies on the software
alone to do the job, whereas CAT does what it says on the tin – it assists translators.
Below are some of the ways that CAT software can help speed the process of translation
along:

But what about MT where the software itself does the bulk of the work? Here,
the translator’s role is more like that of an editor, rewriting and amending
parts of the text that have not been successfully rendered into the target language
by the machine. In some ways, this is just as much work (if not more!) for the
translator as if they were to have written the entire translation without any
technological assistance. The language produced by machine translation is often
unnatural and does not read fluently.

We only need to look at a classic example of Google Translate gone wrong to
see that machines aren’t always the most reliable of translators!

An article in the Guardian from last year described how a culinary festival
in Spain became a rather different kind of festival thanks to Google Translate.
In As Pontes (north-west Spain) where Galician is spoken, a festival was being
held to celebrate grelo, the leafy green vegetable that is grown in this region.
When the organisers used Google Translate to advertise the event to Castilian
Spanish speakers, it became something quite different: a clitoris festival…

And take a look at Google’s English translation of the start of a German news
report:

Too much indulgence with the car industry? The clearing-up of the diesel co-operatives
is intended to have agreements between the Kraftfahrtsbundesamt and Autobauern.
Critical passages should then have disappeared from the examination report.

As we can see, sometimes machines get it wrong. They may not have certain words
in their translation databases and they certainly don’t have the same cultural
understanding as humans.
So while there will definitely be technological improvements in the future,
it seems that the role of the translator is safe for now.